Perched atop a 1.46-acre rise within walking distance to the quaint village of Peymeinade, the original 13th-century stone structure has been artistically restored to the highest levels of modern living, while retaining its rarefied historic and cinematic provenance and inviting French aesthetic.

Le Castelet, currently used as a boutique hotel, includes a main residence of 6,458 square feet with eight en-suite bedrooms and eight-and-one-half baths with an elevator serving all four floors. A separate five-bedroom guest house, a relaxing hammam with multiple pools, a wine grotto, pool house, vineyards and a garage are additional highlights. 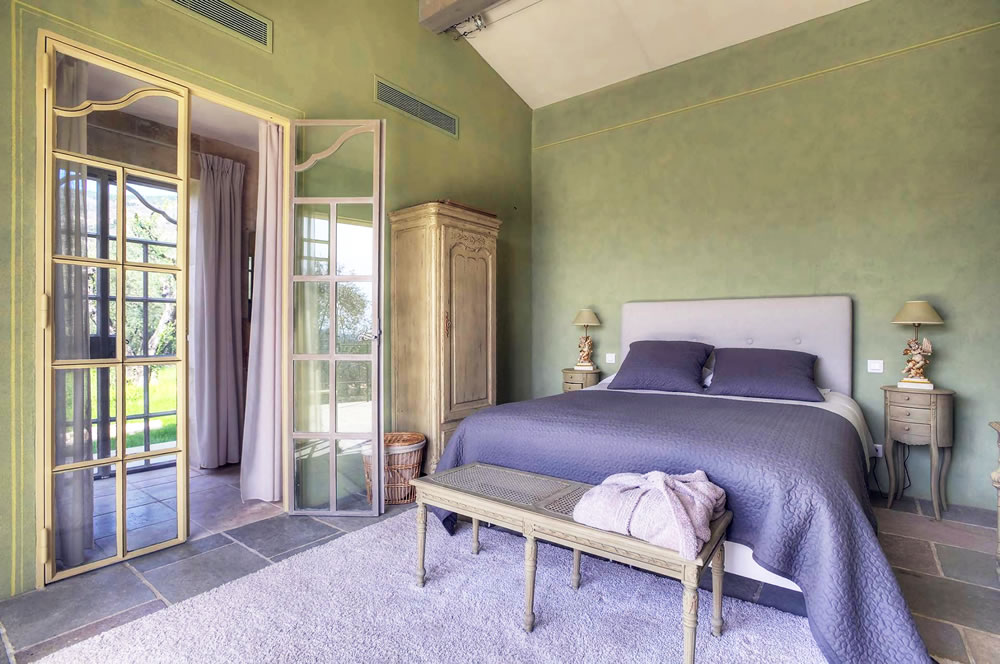 Famed as the summer getaway of global icon Brigitte Bardot after her divorce from film director Roger Vadim in 1957, the home served as her retreat from the glare of celebrity.

Renowned for her natural beauty, Ms. Bardot was also admired as a powerful embodiment of female emancipation during the highly censored 1950s. After starring in more than 40 films, including the enduring classic “And God Created Woman”, she retired from movies in 1973 to focus on her true passion, animal advocacy.

Le Castelet was completely renovated between 1998 and 2011 to include state-of-the-art appliances plus air conditioning, while still retaining its historic character. Interiors of the four-level main house are distinguished by a traditional round bastide tower added in the 1800s, rustic rough-hewn beams accenting the light plaster ceilings and walls, period hardwood and exposed stonework throughout. 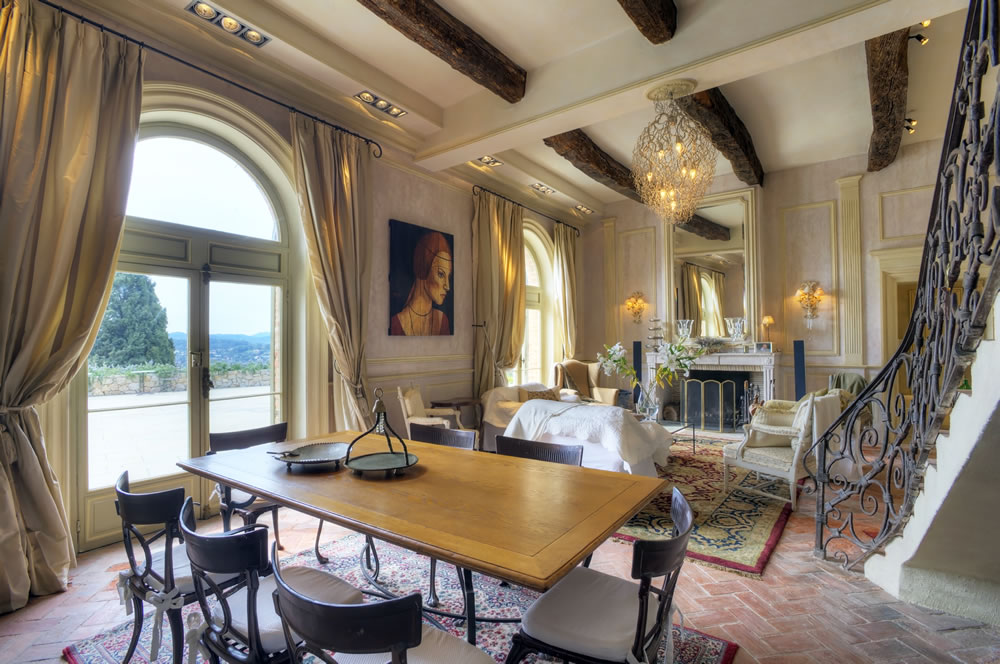 The main salon is anchored by an original Louis XIV fireplace and multiple French doors with lunettes above, flooding the room with natural light and showcasing the stunning Provencal views, then leading to a massive outdoor terrace.

A charming candle chandelier hangs above the informal dining area off the country kitchen, which has been reimagined to delight any chef. An additional highlight is the master suite with its library, fireplace and a sea-facing view entirely of glass with doors leading to a private terrace. A wine grotto, artist studio, caretaker quarters and storage rooms complete the main residence.

Helena de Forton of Christie’s International Real Estate said: “This property is the perfect fusion of architectural history and modern sensitivities. The amount of light in a centuries-old structure is a rarity. What is even more extraordinary are the outdoor spaces.” 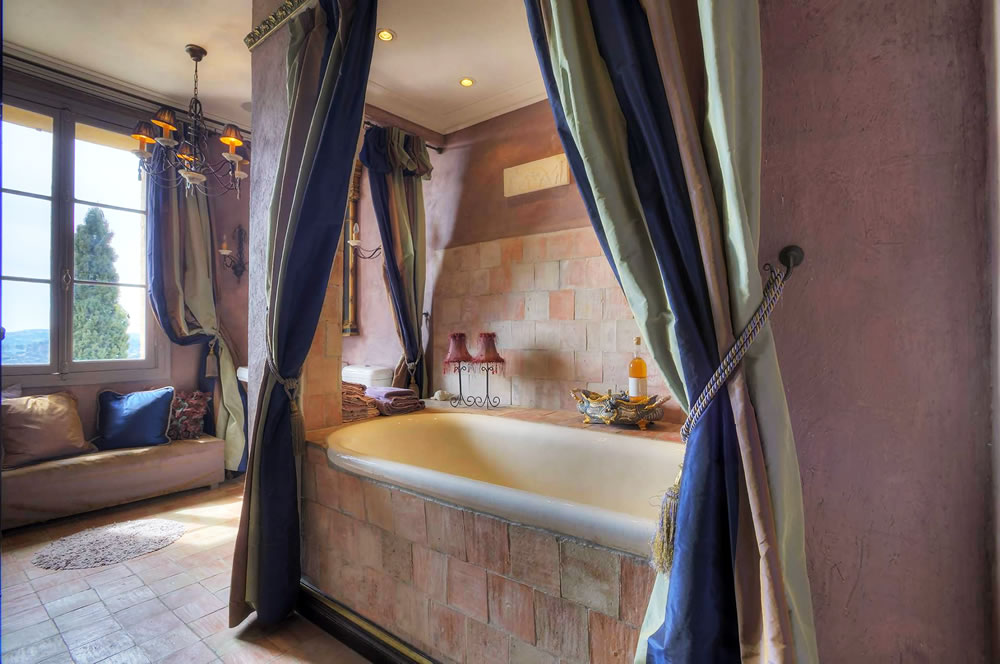 Two tiers of enormous stone decks draped with foliage invites al fresco entertaining. The pool on the upper level where Ms. Bardot basked in the sun has been transformed into a serene Japanese water feature. Stone steps lead to recently added and oversized infinity pool, equipped with underwater speakers and an attached spa that easily accommodates 16.

The terrace above creates a loggia facing the pool with an outdoor kitchen with pizza oven, a large screen that retracts into the ceiling and a table-area large enough to seat 60 diners. There is also a boules court, a separate spa area that is covered and equipped with multiple tubs and a sound system, with large stands of cypresses to provide a security screen.

The five-bedroom guest house has its own infinity pool and outdoor kitchen with pizza oven. There is also a small garden cottage hidden among the vineyards. The orchards, terraced with ancient rock walls, include an olive grove of almost 100 trees, three vineyards, citrus and fig trees plus a private well housed in its historic stone structure and providing pure mineral water. 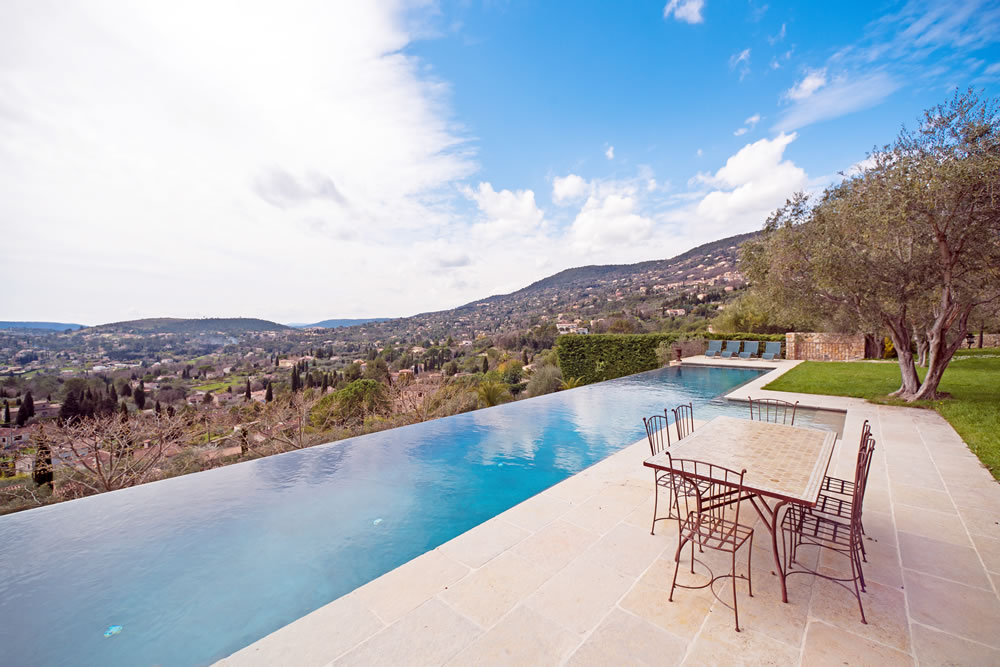 The small village of Peymeinade, though quaint and peaceful, offers top-tier dining and shopping. Nearby is the medieval village of Grasse, acclaimed ‘Perfume Capital of the World,’ given its optimal climate conditions, grows roses, jasmine, lavender and other flowers for Hermès, Dior and the iconic Chanel No. 5, to name a few. The town’s perfume museum and summer festivals honouring flowers are not to be missed. Cannes, with its international airport, vibrant urban atmosphere and host to the globally renowned Cannes Film Festival, is only 35 minutes away.